How to not Write Emacs Config in Org

I have started simple. ~/.emacs.d/init.el had just one line:

After restarting Emacs everything seems to have worked fine C-h v told me that the value of org-directory is indeed ~/org. So far so good. I have opened init.el and its content was:

That's right, the same as the code I had in the source block in init.org. Clumsy Emacs beginner, I thought, I must have written the wrong file! I have fixed it quickly to put org-babel-load-file in the right place and restarted Emacs. Right after start *Warnings* buffer popped up and showed me this error:

Whoa! My first line of configuration and somehow I broke Emacs already and made it load the config again and again. I searched the Internet for the error message in vain, in frustration went to #emacs and cried for help. I've been told that it looks like org-babel-load-file needs something that hasn't been initialized yet causing Emacs to attempt to load the config again. It makes sense, I thought. With some guidance (thanks pjb!) I made Emacs load the .org file 5 seconds later when init.el has already been processed:

Once again, I restarted Emacs. This time, no error messages on startup. When I switched to *Messages* however, I saw an endless stream of:

Hm, this is interesting, I thought. The problem happened after Emacs was fully initialized as well. I killed unresponsive Emacs and started it without loading the config using emacs -q. I hit M-x and used eval-expression to run (org-babel-load-file "~/.emacs.d/init.org"). Not surprisingly, the same thing happened: Emacs started reloading the config endlessly.

In despair, the next time I loaded just a random projects.org file that didn't have any configuration or any source code whatsoever. I've got an error. But also something magical happened - a debugger popped up! 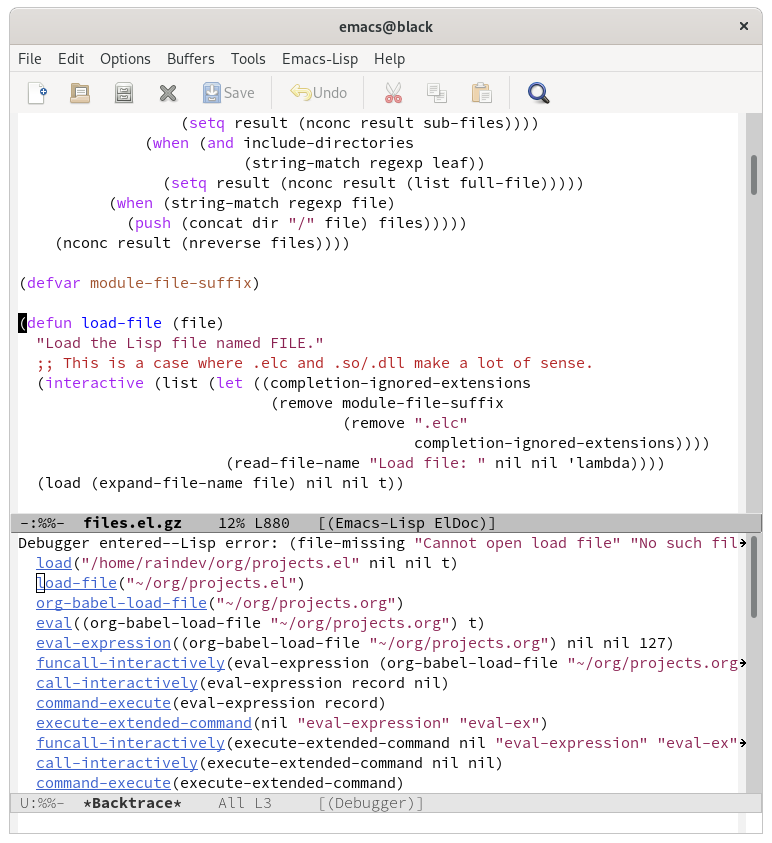 I could see the chain of function calls that led to the error. Even more I could click on them and see the source code. Wow! This is amazing! I had the source code of Emacs' packages right in front of me.

I started exploring. The error message was:

That's strange, I thought. I have loaded projects.org and not projects.el. Something is going on. Looking at the backtrace I could see org-babel-load-file("~/org/projects.org") - that's the function I have called. The next call was load-file("~/org/projects.el") - .org has changed to .el. Something must have happened during the previous step. I clicked on org-babel-load-file and started reading the code:

And that's what happened a couple of lines below:

So, the function exports the source code to a file with the same name but .el extension. Ah! As there was no code in projects.org nothing was exported leading to file-missing error.

Going back to the original problem with the new knowledge: why wasn't init.el replaced by the code from init.org then? Oh, wait, wasn't it? Remember the first time I loaded the Org config, I discovered I've accidentally written the config to init.el directly. I didn't!

org-babel-load-file did. As the comment says, the function only writes .el file if the .org file is newer. That's what happened the first time. Afterwards I kept tweaking init.el so it was always newer than init.org. But what else, when org-babel-load-file was executed Emacs thought init.el is the file that has the code exported from init.org and loaded it. In turn it has called the same function and entered the endless cycle. 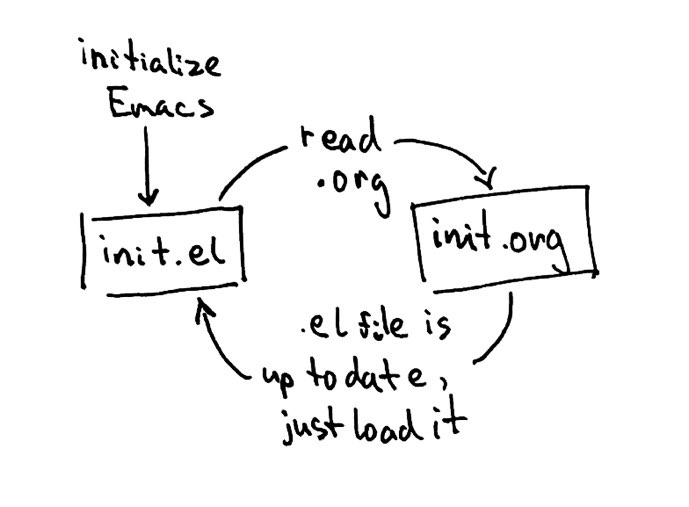 The solution was simple - give the Org config a different name:

And that's it. config.org will get exported to config.el and loaded once.